This was an article I never made the time to release. It was meant for the site Ultimate-Guitar.com while I was still involved. I have moved on, but the foundational aspects still stand.

Note Names in the West: History and Variation

In traditional Western music theory, there are a set of 12 repeating pitches, called notes, that have distinct names attributed to them.

Assuming a working knowledge of musical interval names and their usage, this article aims to:

It also provides an abbreviated glossary through the use of footnotes.

NOTE: do NOT take this as a reason to use other systems' naming conventions in making chord sheets for UG. They may certainly be more culturally appropriate, but current UG style strictly adheres to the usage of the Anglo naming system, in particular the one which uses, in order:

The earliest written accounts of Western music and music theory stem from the Greek civilizations. Greek theorists like Cleonides used combinations of tetrachords 1 , along with species of fifths (with either a semi-tone or tone appended to either side of a tetrachord), to create species of octaves like so:

Thus these species of octaves, the precursor to Western modes and scales, were created. However, note names were based not only on their pitch, but also on their octave. (In other words, notes were not organized into pitch classes. 2) There is also a gap in recorded history from this point until around 1000 AD; only limited information remains.

The Development of Notation as We Know It: The Early Role of the Church

The Church held much power in Antiquity, including the bulk of sacred music archives and literacy. Until the schism of the Church into Eastern (Greek Orthodox) and Western (Roman Catholic) halves, the high language used was Latin, whose alphabet many people use to describe note names.

Guido d'Arezzo was a monk who lived around the 11th century. From the contents of his preserved works, we have clear indications of repeating pitch class 2 labels, which was different than what the Greeks had used.

He was one of the pioneers of neumatic notation. 3 While the frequency value of specific pitches would differ until reliable standards could be made, the presence of clear note names had been established by then. Below is a plaque on his house showing an example of this notation: 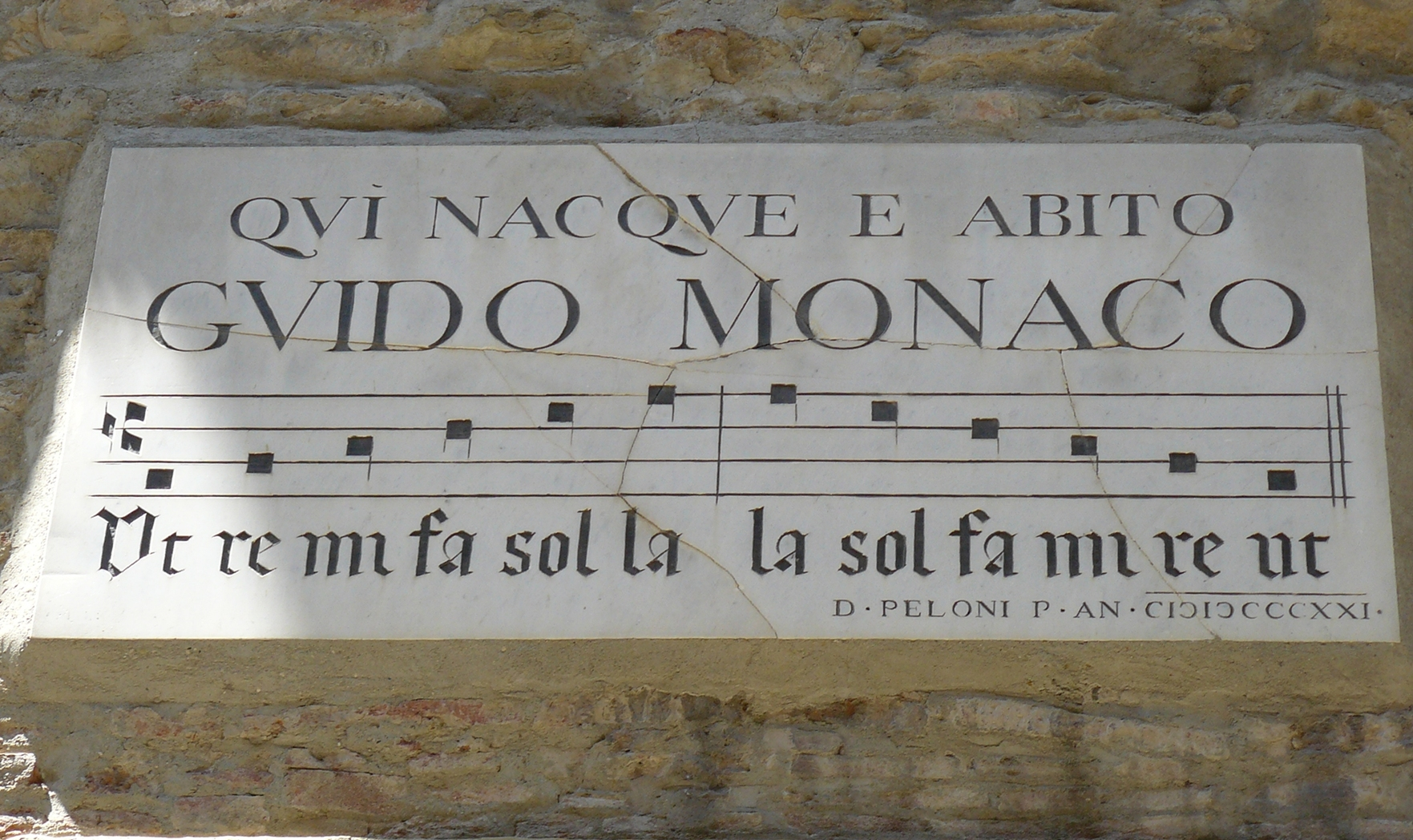 Fig 2. Plaque with neumatic notation.
Guido of Arezzo's house with plaque by Ivanhoe, licensed under CC 3.0

Guido d'Arezzo was also directly responsible for the development of solmization syllables (also known regionally as sol-fa, solfège, or solfeggio). Using his chant "Ut queant laxis" as a guide, he mapped the following syllables to established note names:

Only six notes were given solfège names at any one time. The Church was using a fixed set of hexachords 4 in their music, each of which had only one half-step interval (mi to fa). These hexachords were called "hard" ("durum"), "soft" ("molle"), or "natural", depending on if they started on the notes "G", "F", or "C", respectively. 5 To change from one hexachord to another via shared pitches was allowed, and the process of doing so was called mutation.

Note that the pitches of given notes were not standardized until much later. Any note names, unless otherwise indicated, indicate only the equivalent modern interval between each solfège syllable. Only one semi-tone interval, "mi" to "fa", was allowed in one given hexachord.

Some of Guido's protégés made a learning aid called the Guidonian hand, showing the interaction between notes and hexachords. The hand starts on G (third fret on a guitar's 6th string) - signified by the Greek letter Γ on the thumb tip - and ascends up to E (twelfth fret on the first string) outside the hand. 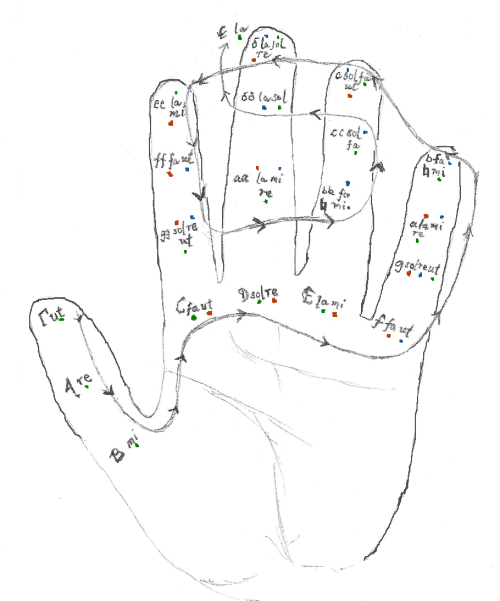 There are some quirks with the notation of "B". Looking at the pinky tip, there are two different notations used for "B":

As the only "correct" semitone interval existed between "mi" and "fa", these intervals had different pitches. In the hard hexachord, whose preceding note was an A, the following pitch - a tone away - would be B-natural. In the soft hexachord, whose preceding note was that same A, the following pitch - a semitone away - would be B-flat.

Incidentally, the hard, square B resembles a natural accidental in the drawn hand and an "H" in the later representation. Indeed, the hard B later influenced the development of the natural and sharp accidentals, as well as the usage of "H" as B-natural in central Europe and Scandinavia, among other places. The soft, rounded B influenced the development of the flat accidental and was used to denote B-flat in the aforementioned regions.

Aftermath and Additions to the Solfège System As Described

There are several theories of who did what to the solfège system, but the result remains the same.

Other people are also attested for creating their own tone syllables, but Doni's system is the most well-known system worldwide, in part because of the fame of Rodgers and Hammersteins' musical The Sound of Music.

Nowadays, the use of solfège in the English-speaking world is mostly limited to the world of vocal music. However, solfège remains a vital note-mapping tool internationally, particularly in China and countries dominated by Slavic and Romance languages.

The Need of 12 Notes in a Western Octave

For the mathematical explanation of the practicality of using 12 notes within each octave, I highly suggest reading University of Waterloo assistant professor Michael Rubinstein's explanation on the subject matter here. Meanwhile, this will outline historical and practical changes in the musical world that led to the usage of 12 notes as is conventional in the current Western world.

Most churches condemned instrumental music, claiming that wordless music could not open the mind to holy thoughts and teachings (evidence that psalmists used instruments were explained away as allegorical). Therefore, most remaining recorded music is at least partly or originally vocal in nature, despite visual and artifactual evidence of instrument usage, particularly in folk music and in home worship gatherings, where vocal parts could be substituted by available instrumentation. Additionally, it is clear instrumental dance melodies existed far away from the church, but they were often improvised or learned by rote.

12 Tones, Already Set Up by Guido

However, the strict patterns used by the church may themselves have helped aid their dissolution. Below is a chromatic scale on C as we know it, with notes differentiated by their inclusion/exclusion in the established hexachord system:

While four notes remained outside the Guidonian hand, the intervals leading to their playing already existed. Between the F and G hexachords, Bach could already monogram his name into music with the three half-steps created by A, B♭, B♮, and C. 8. That these three half-step intervals existed next to each other implied that notes between whole steps could and did exist. They just were expressly prosribed in the Church until later.

Musica Ficta and The Paved Road to 12 Notes

Non-church musicians often took certain prescriptions on music performance that lay outside the Guidonian hand, prescriptions that encouraged the development of the 12-tone octave as we know it. 14th century Italian theorist Prosdocimo de' Beldomandi wrote on the phenomena of "musica ficta", a practice introduced in order to avoid tritonal dissonance 9 . Certain intervals (major sixth, minor third) were preferred over others, and in order to produce a "sweeter-sounding harmony", performers would place the solfège labels "mi" and "fa" where they usually would not go, effectively either augmenting or diminishing the written note and forcefully introducing the other four notes into a musician's vocabulary.

These accidentals were easier to introduce in the more portable instruments, like the Renaissance lute (from Arab "oud"), sackbut (predecessor of trombone) and viols. In the realm of keyboard music, attempted avoidance of the tritone F-B led to tuners tuning the B key flatter than normal. Eventually, the increasing number of intended accidentals in musical works would lead to the the permanent addition of individual sharp and/or flat keys 10 .

Though the harmonic practices of the pre-Renaissance (parallel fifths and octaves) were at first shunned at their rediscovery in the 19th century, the practices of the age did pave the way to the notes in Western music as we know them.

The genesis of music history may have begun with the Greeks, but the shape of music as we know it started with the ideas from Rome and the Catholic Church, of whom Guido d'Arezzo remained a pivotal figure in notation and intervallic codification. From them we get two sets of note names: the pitch names A-G (in some places, H), and the solfège syllables do-si (later te then ti).

Good Sources of Information and Discussion

1. Tetrachord: a set of four adjacent notes; literally, it means "four strings". ↩
2. Pitch class: a group of notes with the same name. E.g.: G♭/F♯ is the pitch class that includes the tritone below middle C, the tritone above middle C, and all other pitches that are a whole number of octaves apart. 1: ↩ 2: ↩
3. Neumatic notation: a contoured way to write pitches out. Each note was called a neume. Originally lacking definite pitch marking, it evolved to contain such labels by Guido's time. However, it still lacked information such as rhythmic notation until c. the 13th century. ↩
4. Hexachord: a set of six adjacent notes. ↩
5. In many countries speaking other non-Romance Indo-European languages, the usage of "durum" and "molle" transfered over to the names of the major ("dur") and minor ("moll") scales, respectively. ↩
6. While "Sancte Johannes" does abbreviate to "Sj" in English, the "j" sound in Latin is a consonantal version of the sound "i" (pronounced like the English letter "e"). Some Latin scholars would map all letters with such a sound to the orthograph "i". ↩
7. Enharmonic equivalent: a note that sounds the same as another note, but is written differently, possibly for stylistic or theoretical purposes. Ex.: G♯ and A♭ sound the same, but they are written differently. ↩
8. BACH motif: the notes B♭, A, C, B♮ together spell Johann Sebastian Bach's family name. (As a German, he used their system of note naming.) An example can be found here in the third subject of his unfinished Fugue on 3 Subjects (BWV 1080). ↩
9. Musica ficta, which means "feigned music", is the opposite of musica recta, or "correct music". Musica recta would stay within the bounds of the Guidonian hand. ↩
10. For more discussion on the history of accidentals on keyboard instruments, I suggest reading the history as told by the Association of Blind Piano Tuners. However, this is Ultimate Guitar, not Ultimate Keyboards. ↩